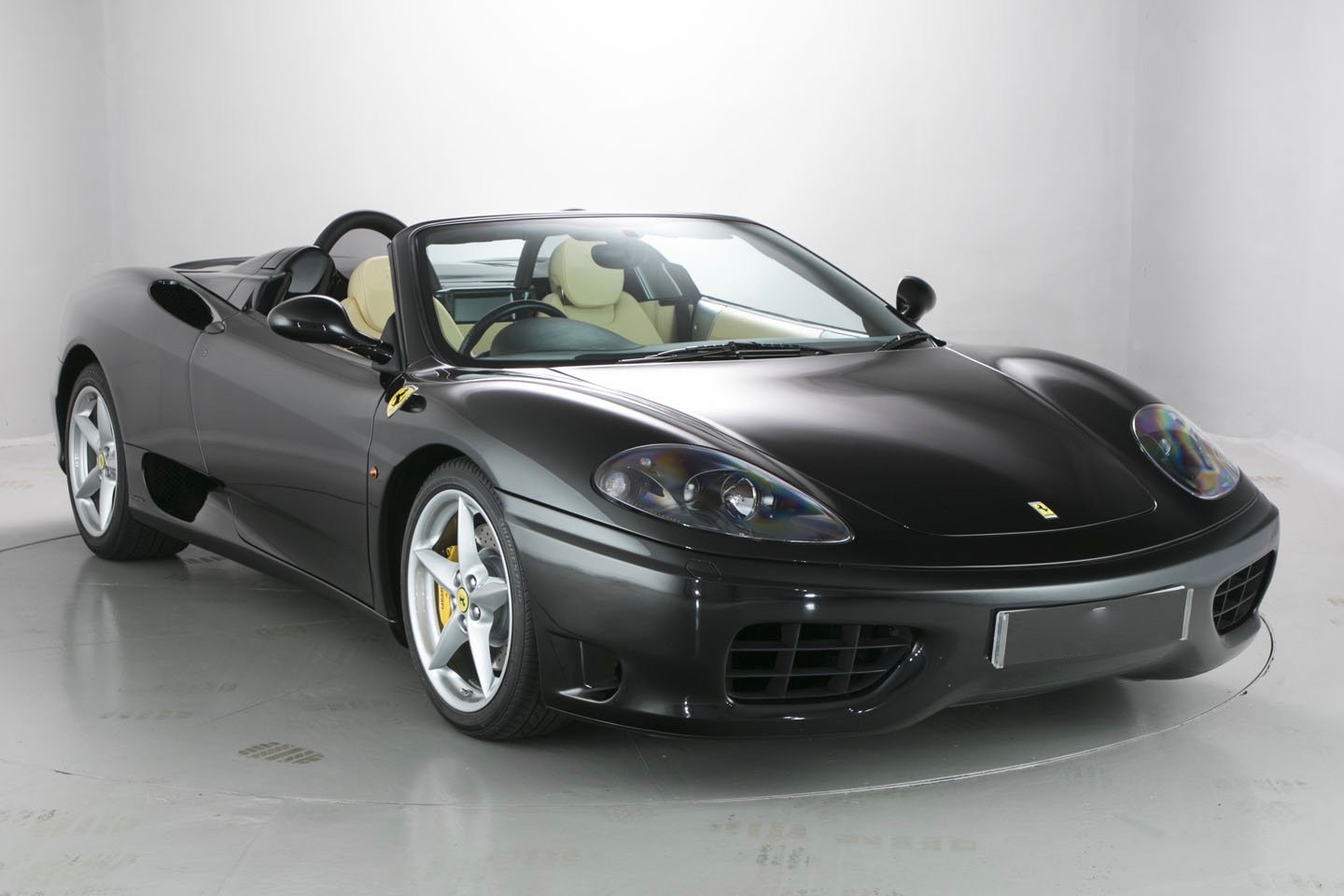 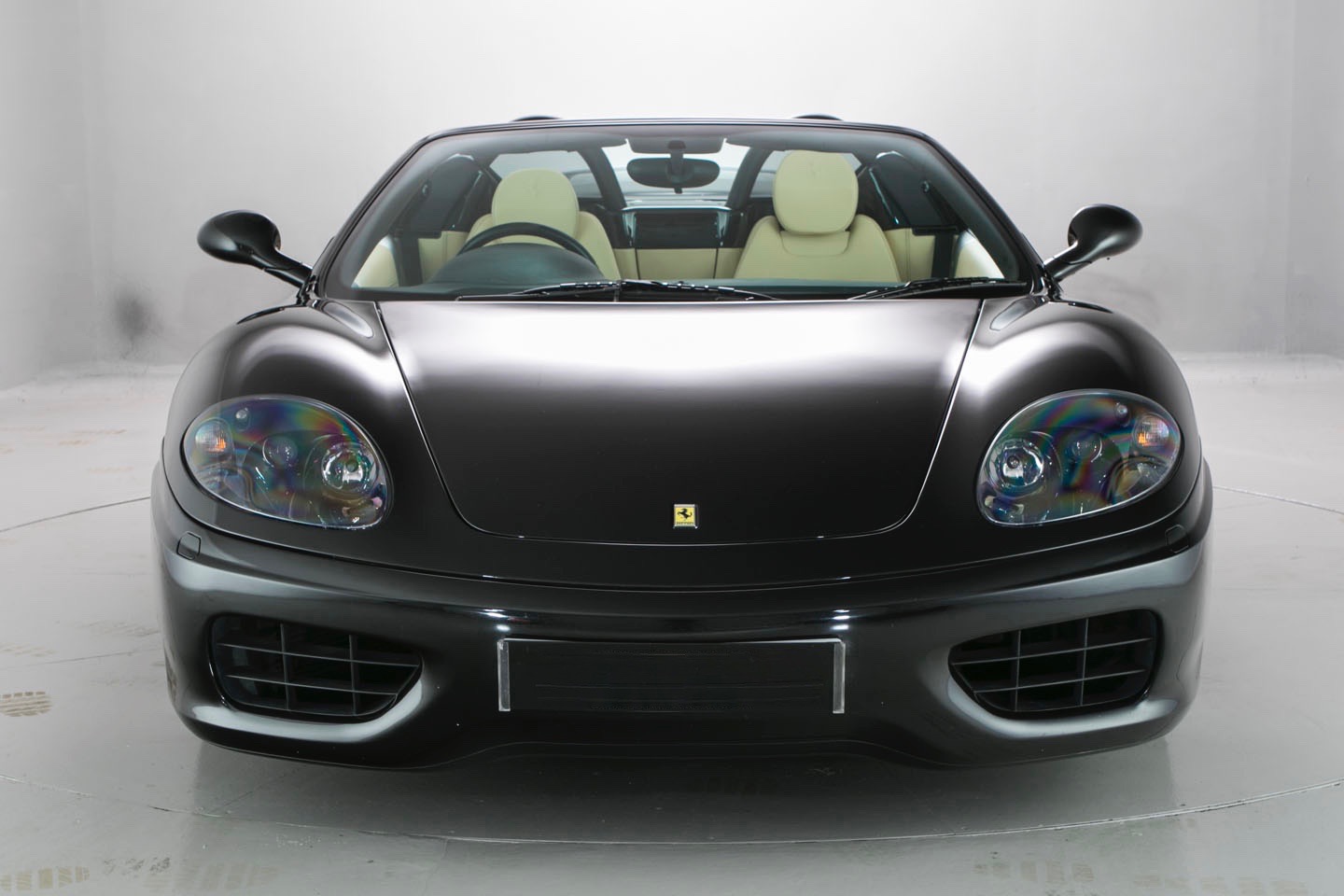 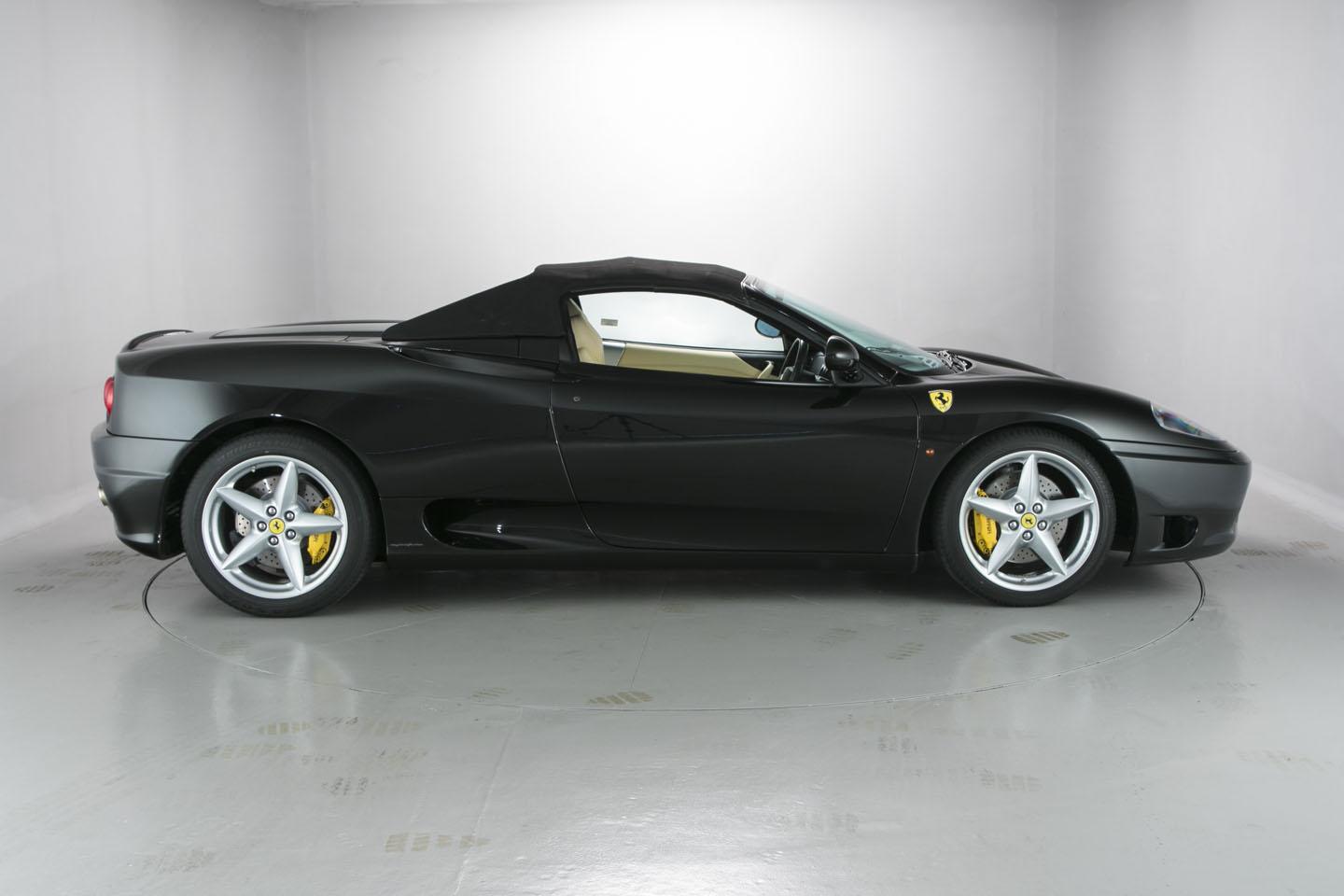 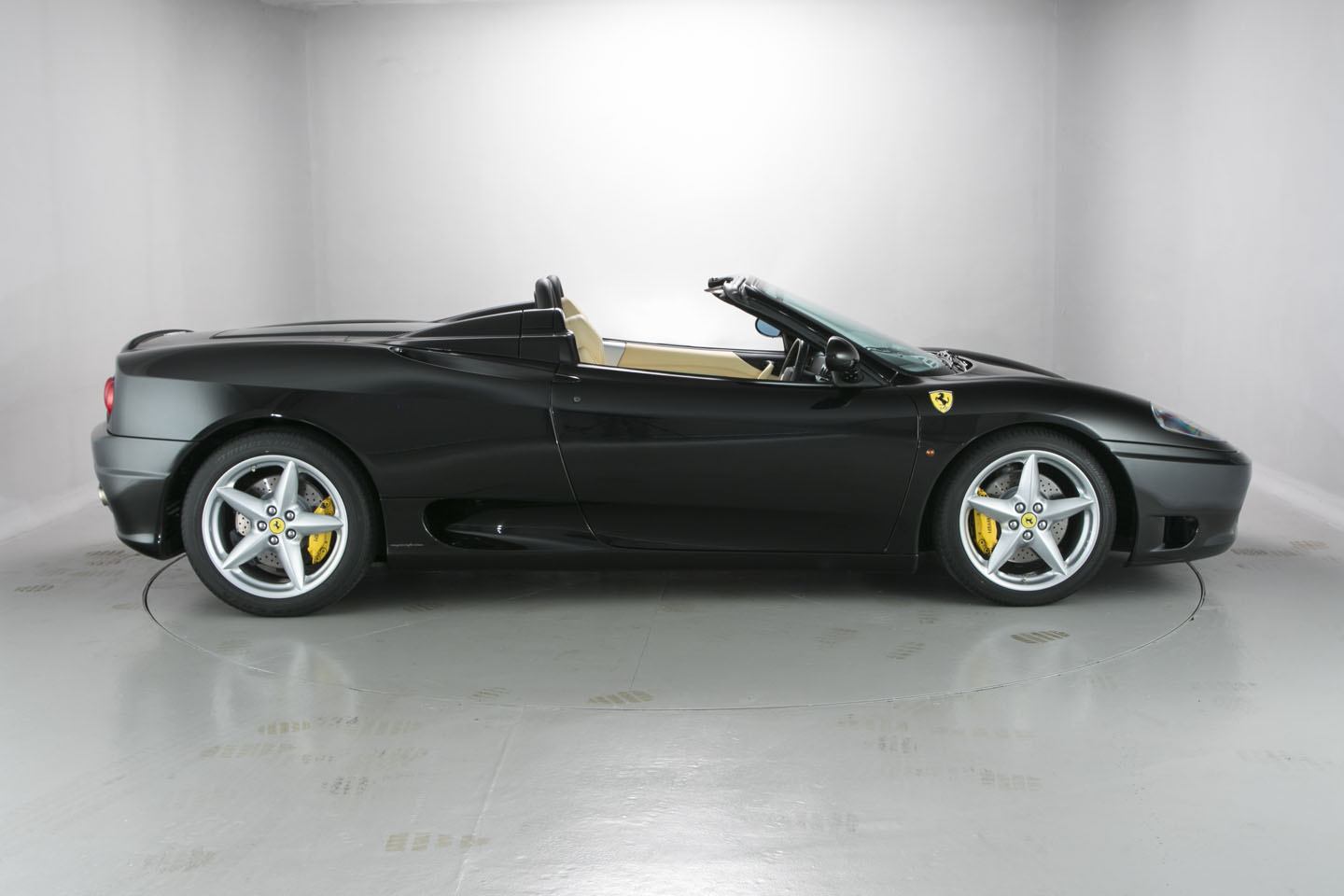 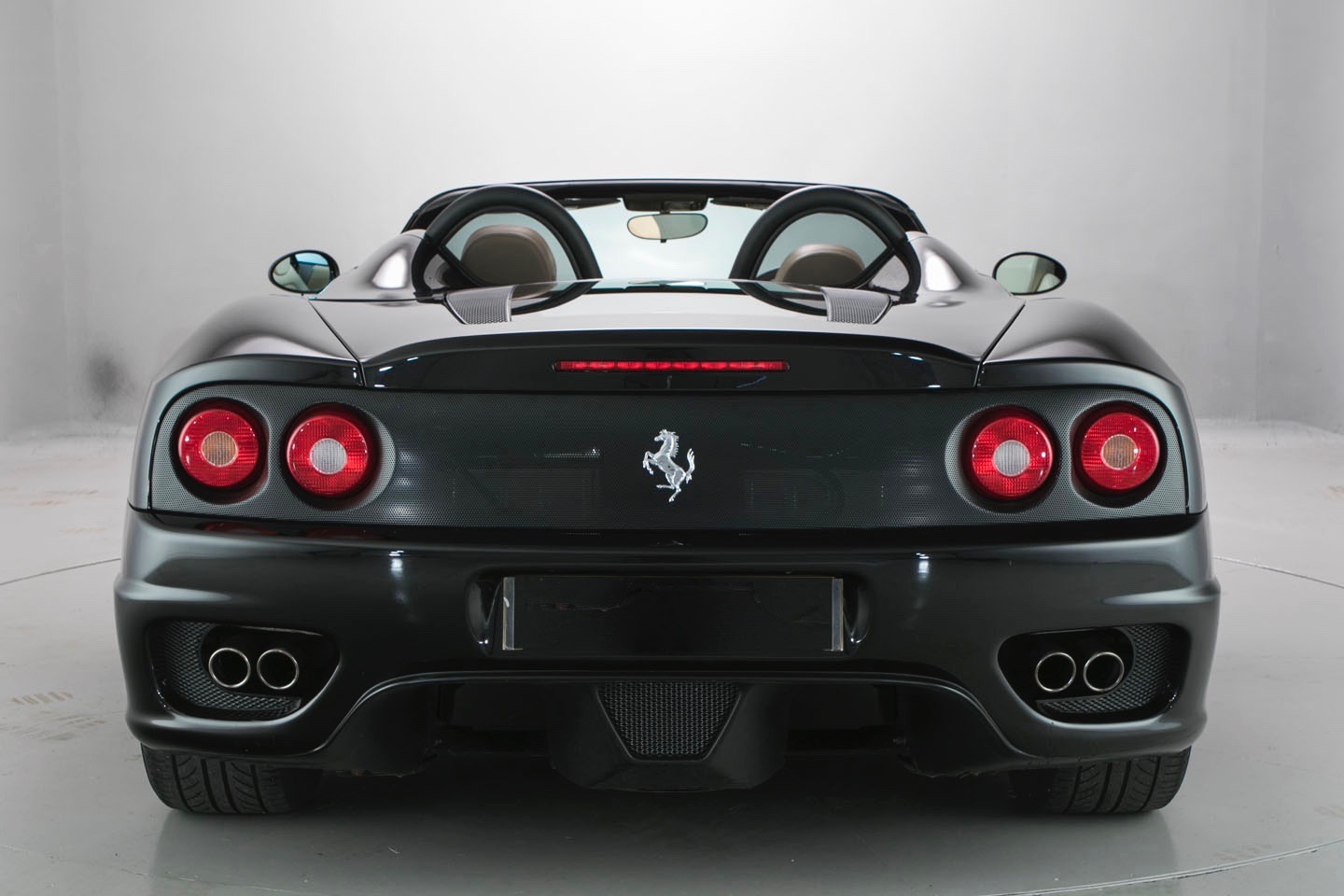 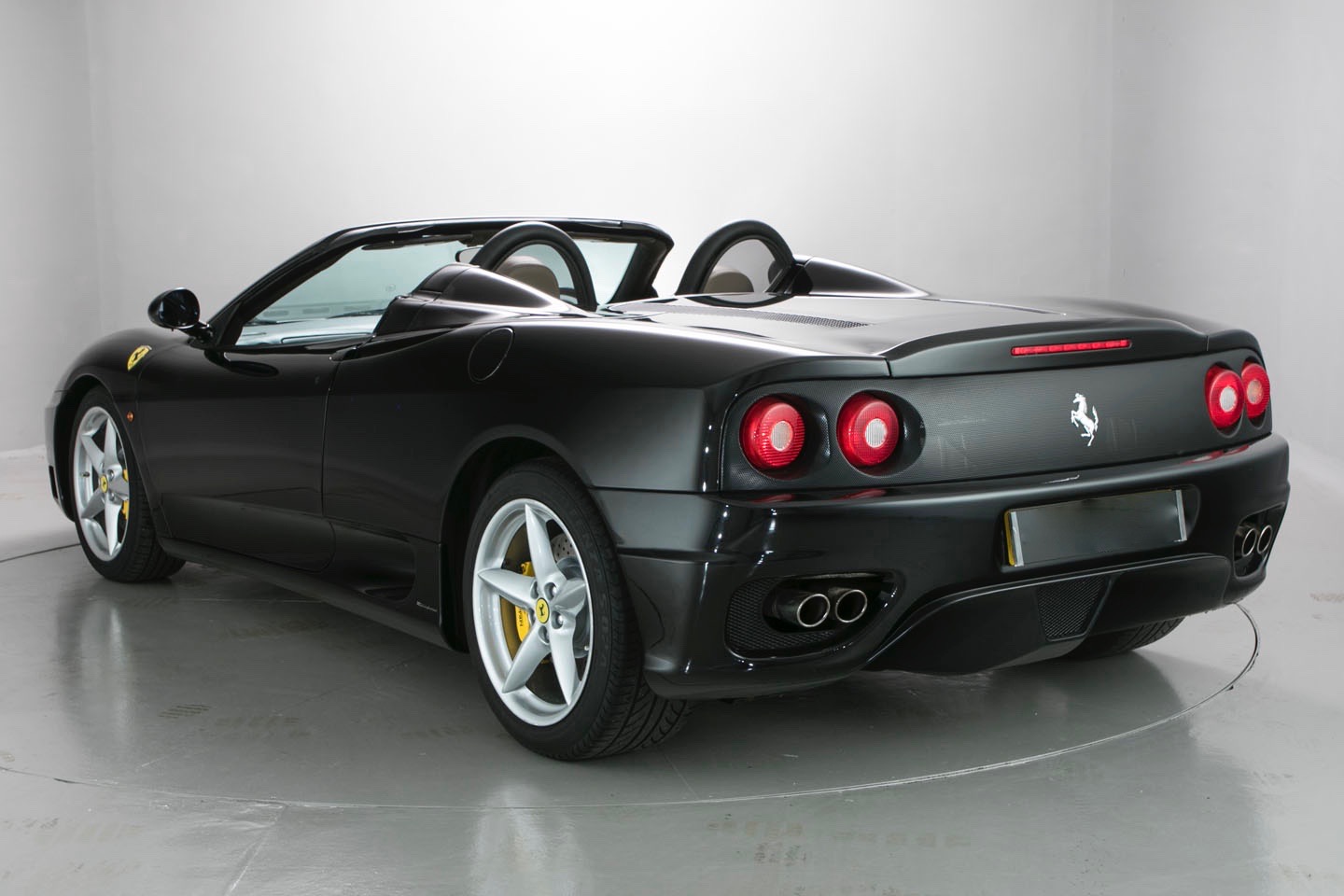 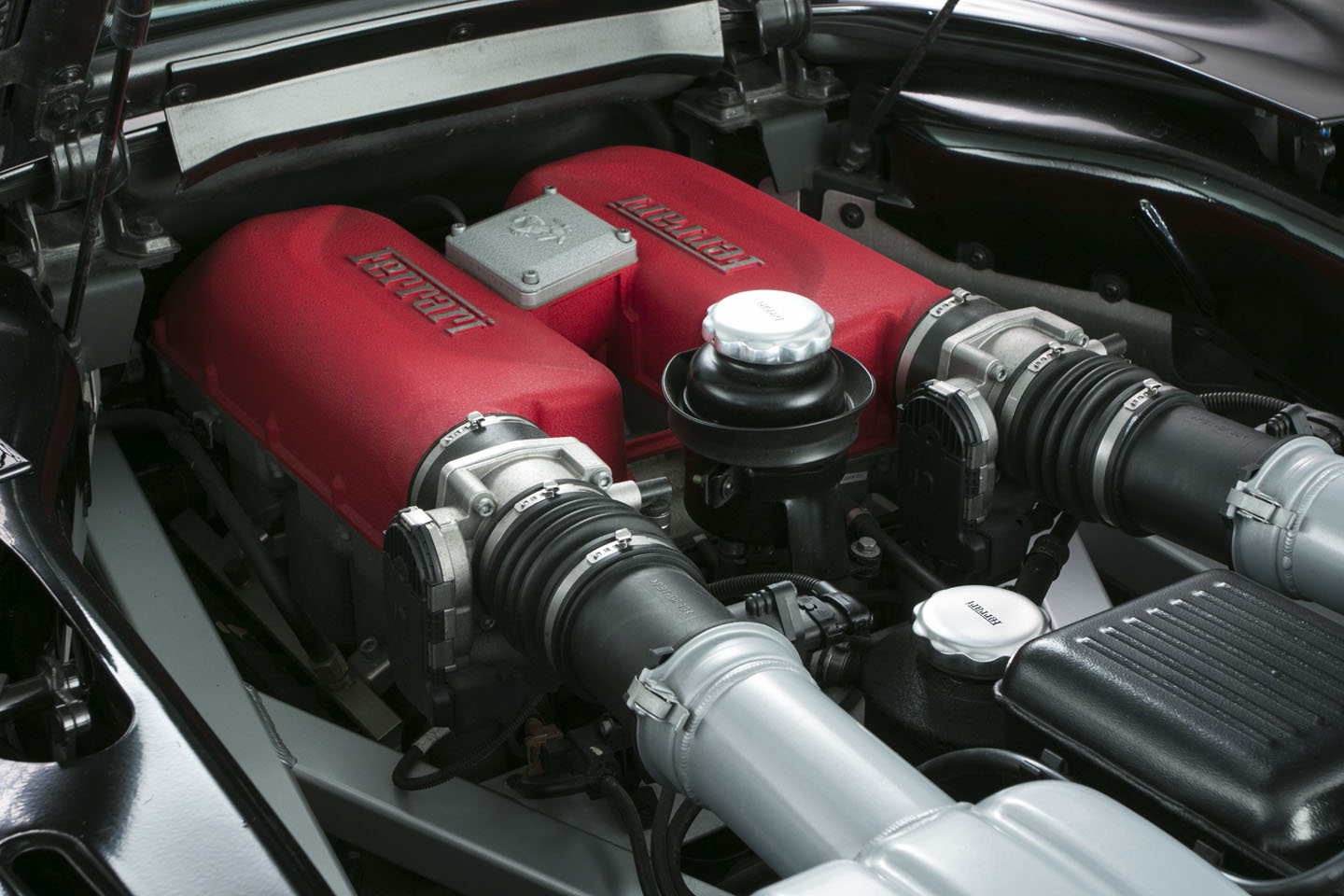 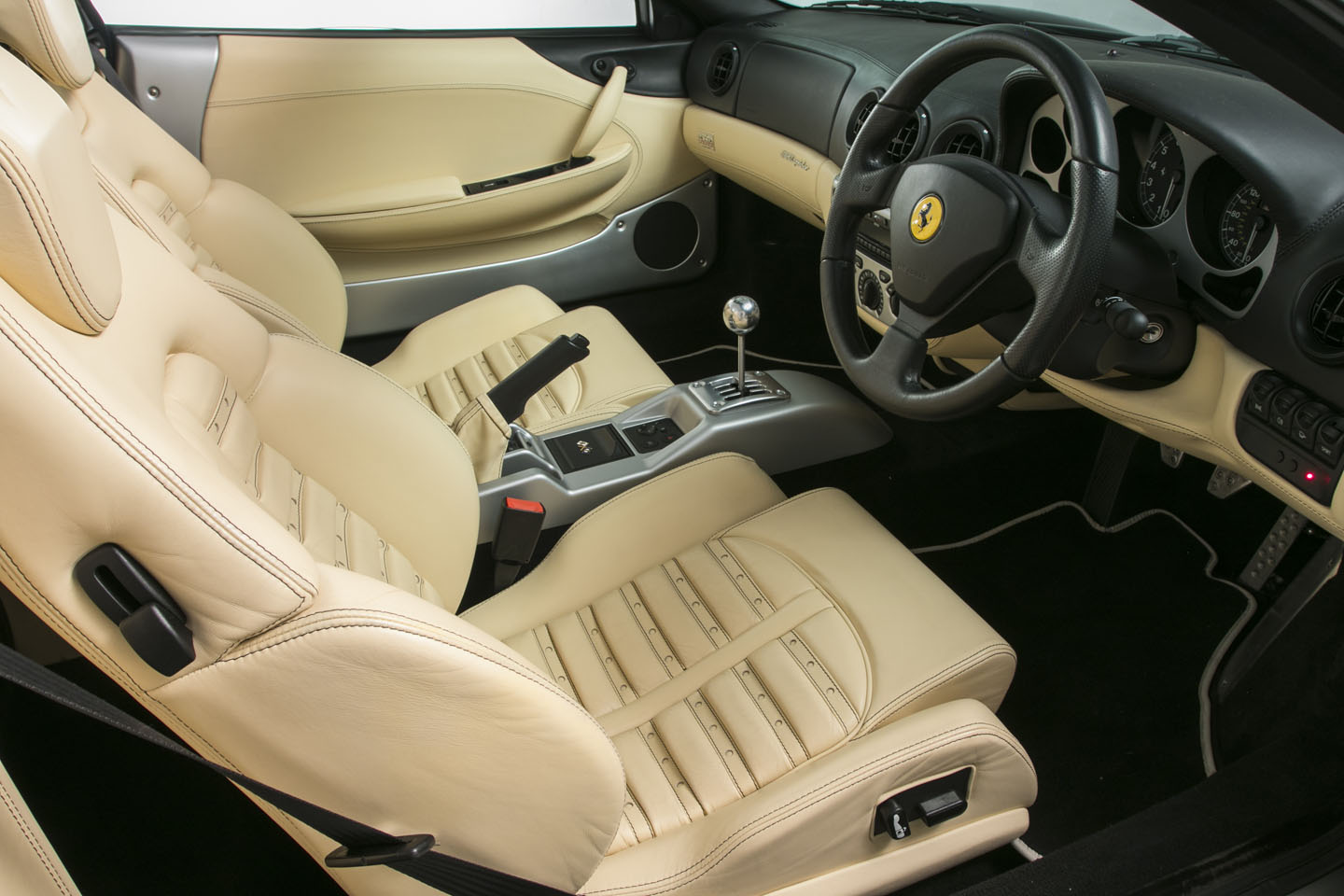 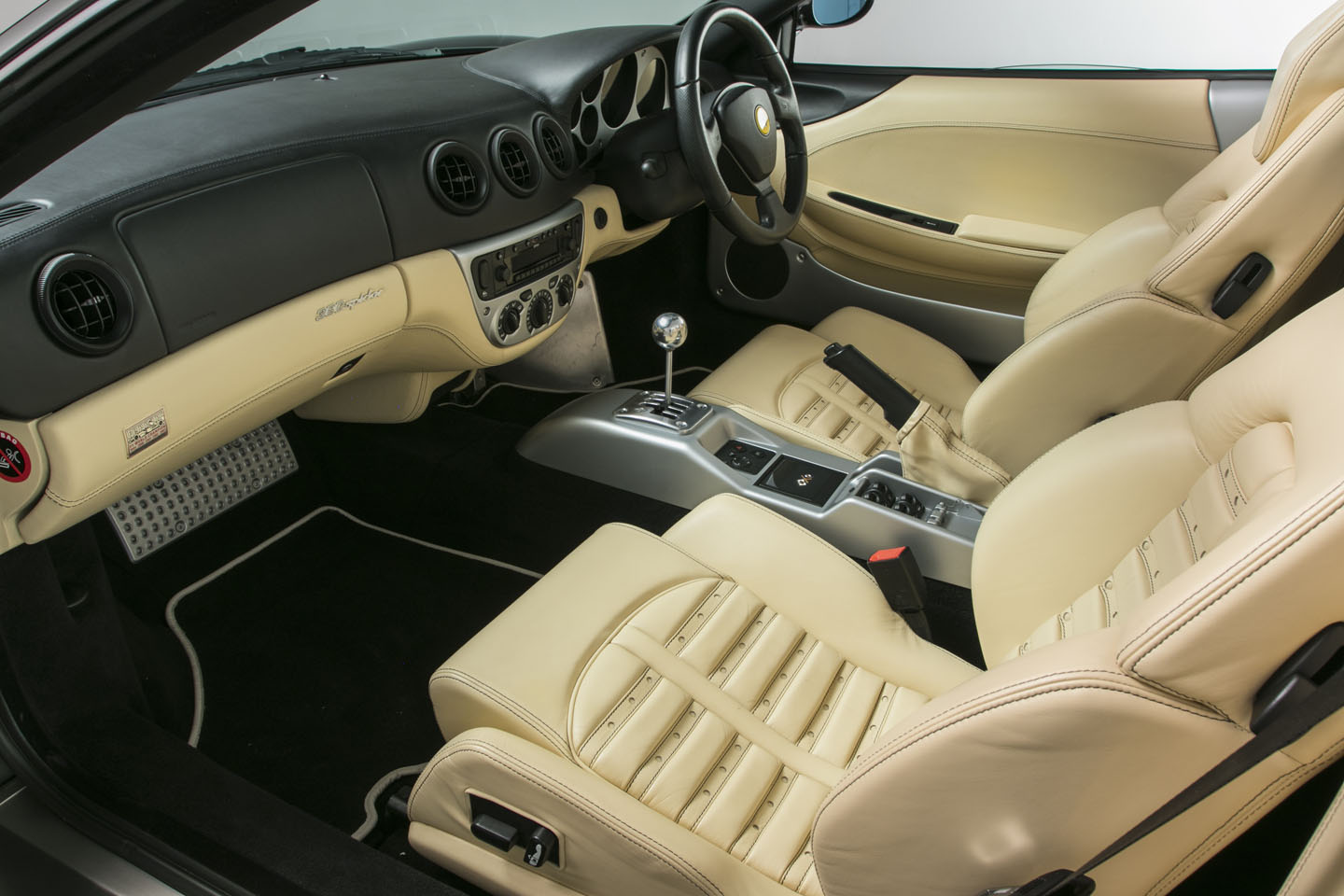 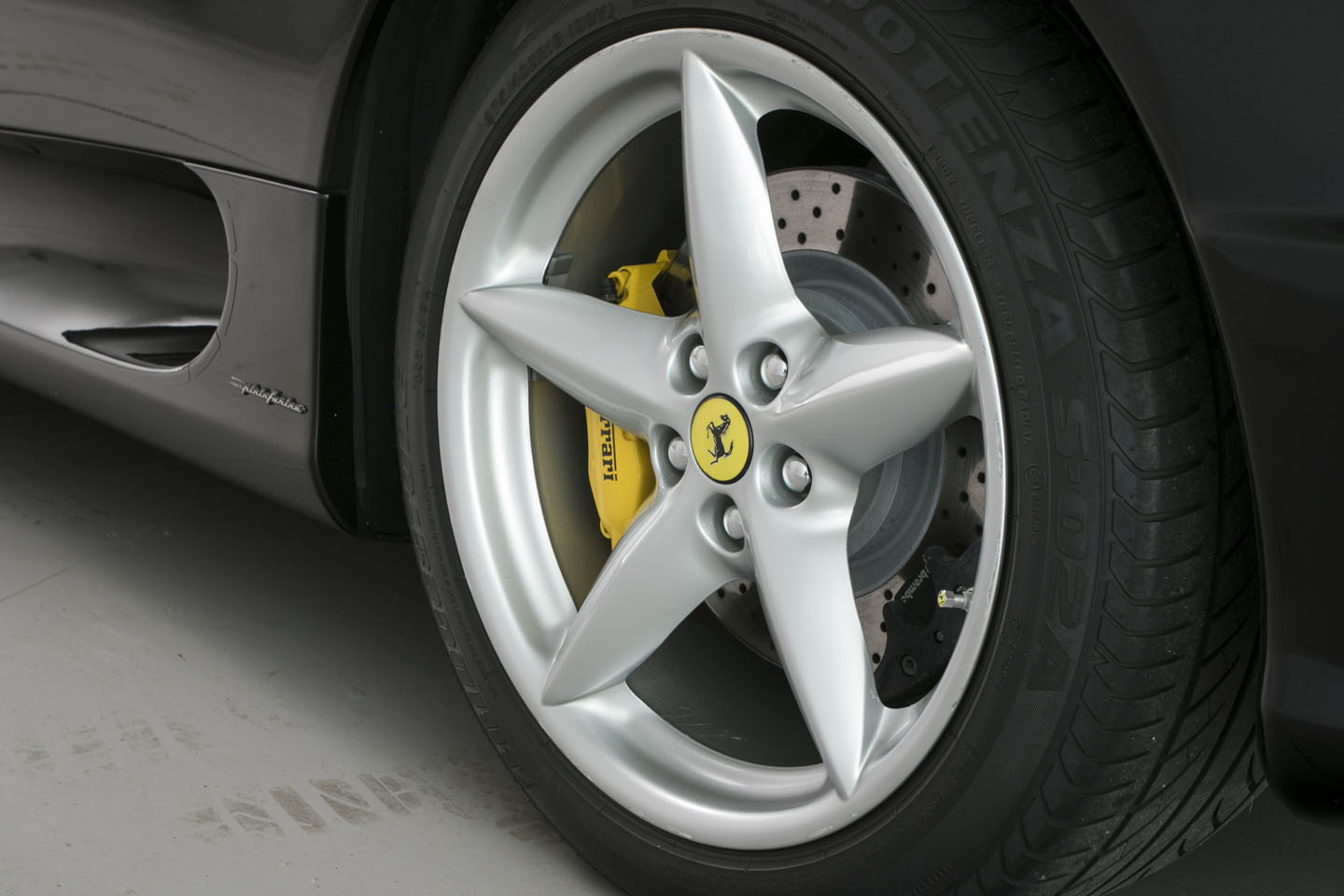 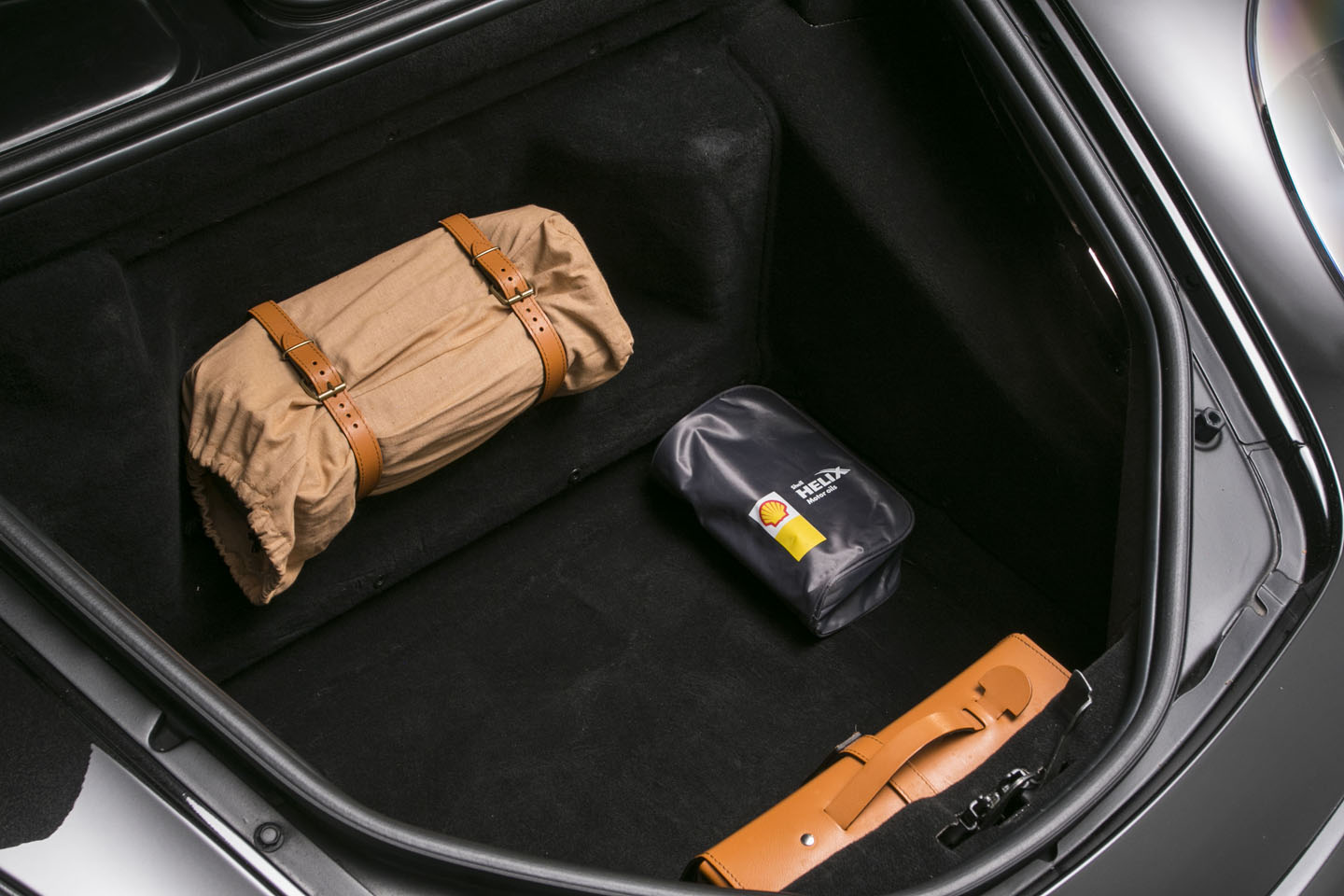 The 360 saw the introduction of Ferrari’s now trademark clear engine cover, showcasing the design of that beautiful V-8 and its red heads.  Everything mechanical about the 360 was new and improved. The aluminium space frame chassis was 40 % stiffer than the 355’s and much lighter. Ferrari’s brand-new 3.6-litre engine only increased overall power by 25 horsepower from the 355, but the 360’s performance was markedly increased due to its improved power to weight ratio. Perhaps the most important change was the introduction of a removable panel in between the passenger bay and the engine compartment.
Combined with the placement of the 360’s timing belt at the front of the engine, this meant that belt changes could be completed with the engine in place, dramatically reducing service costs over previous mid-engine Ferrari’s. The 360 platform was originally designed to work as both a coupe and convertible. Ferrari designers strengthened other areas of the chassis to keep as much torsional rigidity as possible. As a result, the spider is just 130 pounds heavier than the coupe. On sunny days, the 360’s top folds out of sight in just 20 seconds, keeping the lines of the beautiful Pininfarina body unobstructed.
The 360 Spider is Ferrari’s 20th road-going convertible. The 360 was created with a Spider variant in mind; since removing the roof of a coupe reduces the torsional rigidity, the 360 was built for strength in other areas. Ferrari designers strengthened the sills, stiffened the front of the floor pan and redesigned the windscreen frame. The rear bulkhead had to be stiffened to cut out engine noise from the cabin. The convertible’s necessary dynamic rigidity is provided by additional side reinforcements and a cross brace in front of the engine. Passenger safety is ensured by a strengthened windscreen frame and roll bars.
The 360 Spider displays a curvilinear waistline. The fairings imply the start of a roof, and stable roll bars are embedded in these elevations. Due to use of light aluminium construction throughout, the Spider weighs in only 60 kg (130 lb) heavier than the coupé.
As with the Modena version, its 3.6 litre V8 with 400 BHP (300 kW) is on display under a glass hood. The engine, confined in space by the convertible’s top’s storage area, acquired additional air supply through especially large side grilles. The intake manifolds were moved toward the centre of the engine between the air supply conduits in the Spider engine compartment, as opposed to lying apart as with the Modena.  In terms of performance, the 0-60 time was slightly slower at 4.4 seconds due to the slight weight increase, and the top speed was reduced from 189 to 180 mph. Despite the car’s mid-mounted V8 engine, the electrically operated top is able to stow into the compartment when not in use.
This car is in wonderful condition, and boasts a full service history, and is complete with its original book pack and MOT history certificates. The car is also offered with a 12 month comprehensive warranty.